Animal Defenders International (ADI) is delighted that Bolivia’s President Evo Morales has signed a new law to end the use of wild and domestic animals in travelling circuses.
After a successful passage through the Congress, the Bill passed the final hurdle, awaiting the President’s signature, and the new Act is expected to be published in the following weeks.
The law, tabled by Congresswoman Ximena Flores of Potosi, arose as a result of evidence gathered during a disturbing undercover investigation by ADI that included: lions confined in a tiny cage on the back of a truck (two were pregnant but continued to perform); a mandrill confined in a tiny cage; three brown bears kept in tiny compartments measuring just 2.5x3m, inside a cage on the back of a truck ¬– their only exercise was the walk to and from the ring for their short performance. Lack of safety barriers were noted, as the animals were made to dance, play dead and ride a bicycle. The findings of the investigation were presented to the Congress together with ADI’s report on the scientific evidence of suffering of animals in travelling circuses, ‘The Science on Suffering’.
The new law bans the use of wild and domestic animals in circuses in the Bolivia, as their conditions and confinement it is considered an act of cruelty. The circuses will be allowed one year to adapt their shows to a humans-only programme and during this time, the government will issue regulations on confiscation and pecuniary sanctions for any breaches of the law.
This is the first national law to ban the use of both domestic and wild animals in circuses. So far, similar bans on animal use in travelling circuses in Austria, Costa Rica, Finland and Denmark only prohibit the use of wild animals or certain species.
In recognition of President Morales’ stand on the issue and his government’s prompt action, ADI has presented the Bolivian government with the Toto Award on animal protection and conservation.
ADI Chief Executive Jan Creamer, “This is a truly historic day for circus animals. The undercover investigations, the scientific research and the hard work of our supporters in Bolivia has made a difference for animals that will reach around the world. Bolivia is the first country to ban animal circuses in South America and the first worldwide to ban both domestic and wild animals in circuses. We applaud the President Evo Morales for setting the highest standard for animal protection for South America, which the rest of the world now needs to follow. We also salute the efforts of Congresswoman Flores and all the local organizations and who along with ADI worked tirelessly to ensure that the bill became a law."

Considerando que a educação deve ensinar desde a infância a observar, a compreender, a respeitar e a amar os animais, 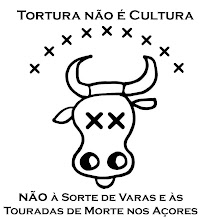